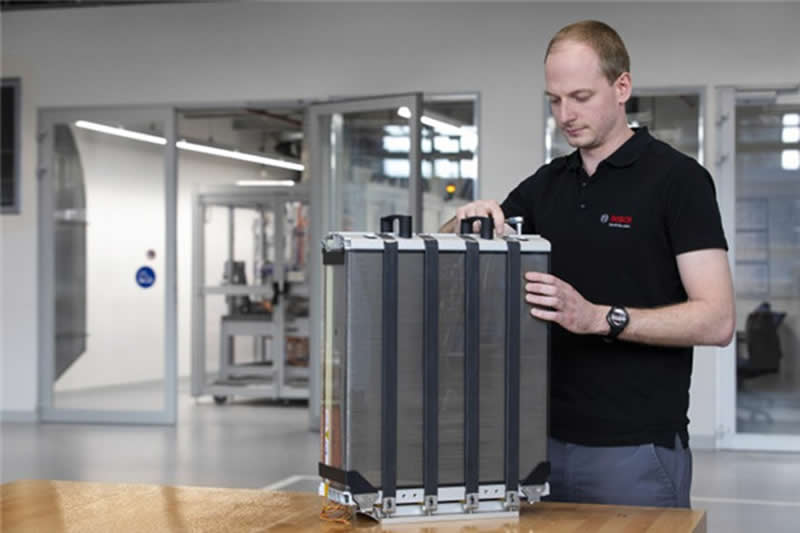 Bosch is taking the first step in this direction, developing truck-specific fuel cell powertrain technology and planning to start mass production between 2022 and 2023. After the fuel cell is successfully used in trucks, Bosch will expand its application in passenger cars. This will undoubtedly make them an integral part of future powertrain products.
Why are fuel cells and hydrogen energy key elements of future mobile travel? This is based primarily on the following: 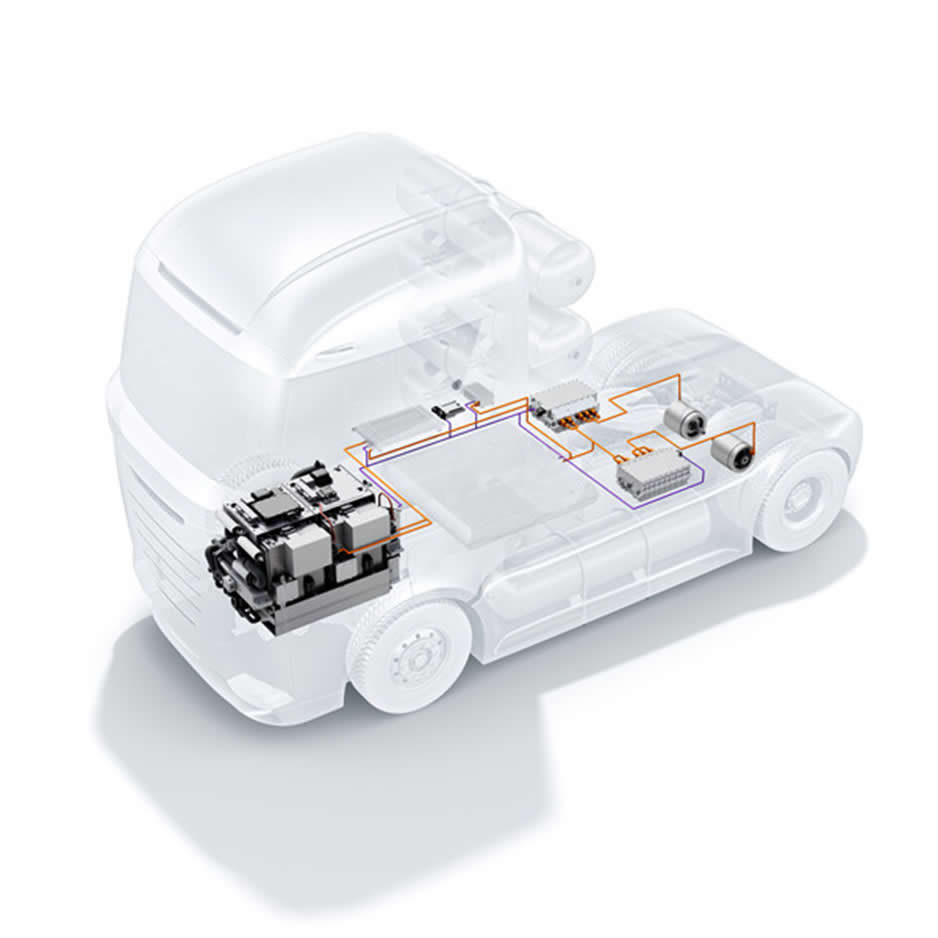 1)Application Prospects
Hydrogen has a high energy density.
The energy supply of one kilogram of hydrogen is equivalent to 3.3 liters of diesel oil. Passenger cars consume about 1 kg of hydrogen per 100 km, while heavy trucks carrying 40 tons consume about 7 kg per 100 km.
Like diesel and gasoline, an empty hydrogen tank can be filled in just a few minutes to keep the car running. Dr Gackstatter concluded :" Fuel cells are the first choice for long-haul, heavy-haul vehicles every day ." At a H2Haul project funded by the EU, Bosch is working with other companies to build and put into use a small fleet of fuel cell trucks. In addition to mobile travel, Bosch is using solid oxide fuel cell technology to develop fuel cell reactors in fixed applications. One of the intended uses is the establishment of small distributed power stations in cities, data centers and electric vehicle charging stations. In order to achieve the Paris climate action goals, trains, aircraft and ships also need hydrogen to provide power, in addition to passenger and commercial vehicles. Meanwhile, the energy and steel industries are planning to use hydrogen. 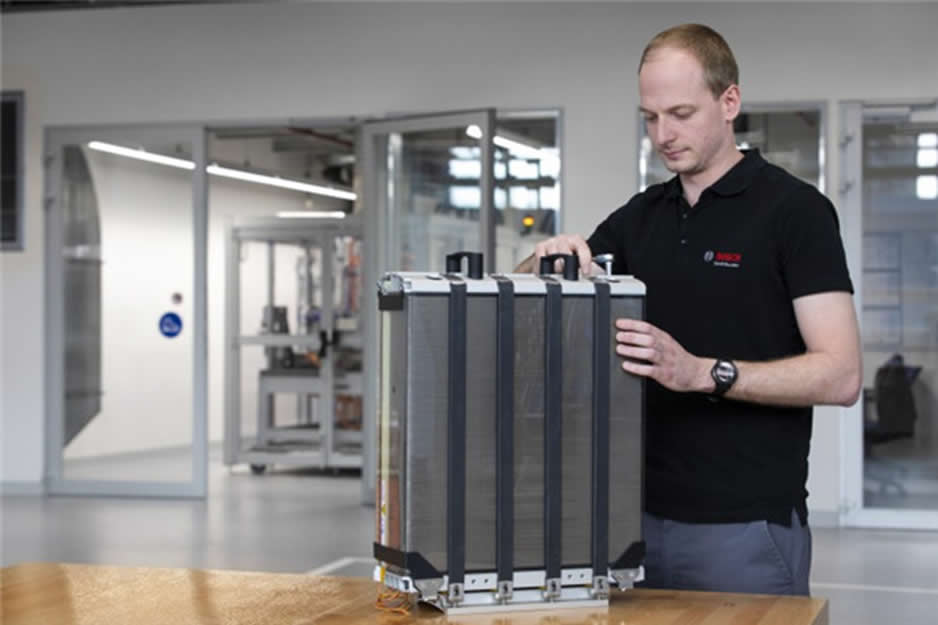 One of the factors that determine whether the powertrain is environmentally friendly and profitable is efficiency. Compared with internal combustion engine vehicles, fuel cell vehicles have 25% higher energy conversion efficiency. The use of braking energy recovery will further increase this proportion. Battery electric vehicles become more efficient by storing electricity directly in the vehicle and using it to provide power. However, energy production and demand do not always match in time and space. For example, the power produced by wind and solar power plants is often turned into waste because of the lack of applications and storage difficulties. In this regard, hydrogen energy has a unique advantage, these difficult to use electricity can be used for distributed production of hydrogen, hydrogen can be flexibly stored and easy to transport. 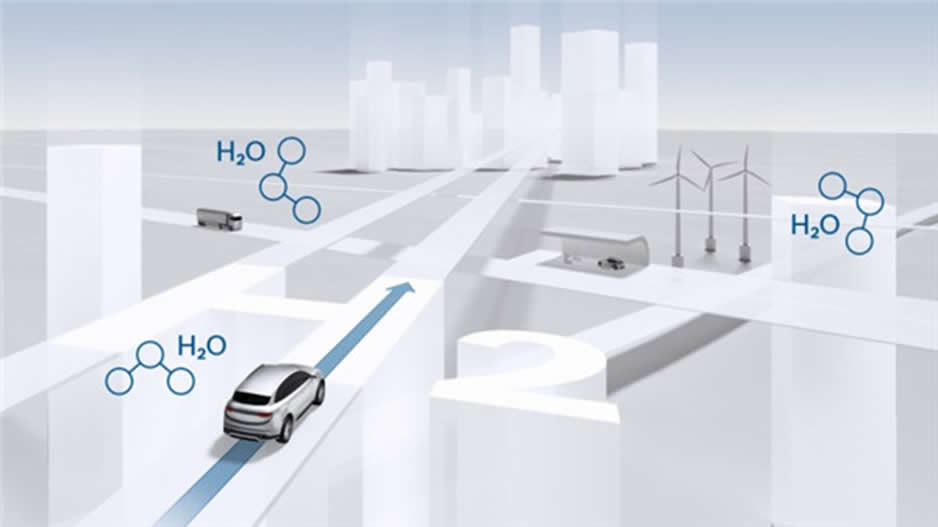 With the expansion of capacity and the reduction of the price of renewable energy generation, the cost of hydrogen energy will be greatly reduced. An international committee on hydrogen energy (The Hydrogen Council) of more than 90 international companies predicts that the cost of applying hydrogen energy in many areas will fall by half over the next decade, making it more competitive. Bosch is currently working Powercell with startups to develop core components —— reactors for fuel cells and prepare for future mass production. Both sides aim to achieve low-cost, high-performance solutions. Gackstatter said :" in the medium term, fuel cell vehicles will not be more expensive than traditional powertrain cars ."
Security
Gaseous hydrogen is safer in vehicles than in fuel vehicles or battery-powered electric vehicles. Hydrogen storage tanks do not increase the risk of explosion. Indeed, when hydrogen is combined with oxygen and the mixture exceeds a certain proportion, it may explode. But hydrogen is 14 times lighter than air, so it is volatile. For example, hydrogen gas from a vehicle hydrogen storage tank rises faster than it reacts with surrounding oxygen. In 2003, a flash fire occurred during a fire test on a fuel cell vehicle, but it quickly went out. The vehicle was largely undamaged.

4) Timing
Hydrogen production is a process that has been repeatedly verified and technically simple. This means that it can rapidly increase production to meet higher demand. In addition, fuel cells have reached the technological maturity necessary for their commercialization and widespread use. According to the International Commission on Hydrogen Energy, the hydrogen economy will have a competitive advantage over the next decade, with sufficient industrial investment and government promotion. "Now is the time to enter the hydrogen economy ." Gackstatter added.